Splashy Fish - The Adventures of a Tiny Bird Fish

This article is about the mobile game Splashy Fish, published by redBit games.

Splashy Fish - The Adventures of a Tiny Bird Fish usually known as simply Splashy Fish, is a 2014 mobile game developed by Massimo Guareschi and published by redBit games. The game was considered to be one of the most popular spin-offs to the original Flappy Bird after its deletion. Similar to Flappy Bird, the concept of the game is to maneuver the bird-fish through as many pillars as possible without it hitting anything. If the screen is not tapped, the fish will fall to the ground. The key difference is that Splashy Bird takes place in the ocean rather than the air. you can play this game online at https://apps.facebook.com/splashyfish

Once installed, the only game mode in Splashy Fish takes place in blue-colored water with low gravity.

After the fish has been maneuvered to go through twenty consecutive pillars, a much more challenging mode known as "Extreme Mode" is unlocked. This mode takes place in red-colored waters, features much higher gravity levels, and can be played after clicking the button at the start of the game.

An easter egg can be used by tapping on the screen with three fingers, each just after the other. If the sound on your mobile device is on, the "8-bit sound effects" can be heard. To switch back to the "16-bit sound effects" you must triple-tap again.

For each multiple of ten, up to one hundred, an accessory or trophy can be unlocked and worn on the fish permanently. Here is a list of all the trophies in the game: 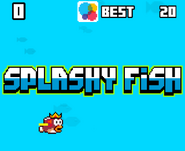 Splashy Fish upgraded to the King of the Ocean Crown (20 pts)
Community content is available under CC-BY-SA unless otherwise noted.
Advertisement